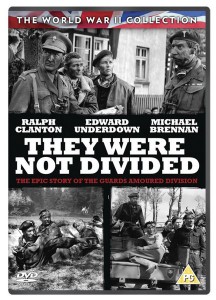 This wartime drama recounts the training process of the British Tank Corps. The story concentrates on two recruits: Englishman Philip (Edward Underdown) and American David (Ralph Clanton). After a grueling training period and a long, frustratingly uneventful encampment on British soil, Philip and David are shipped to the Front. Both men have a rendezvous with destiny during the German offensive at Ardennes. R.S.M. Brittain etches a chilling portrayal of a merciless drill sergeant, while the splendidly mustached Michael Trubshawe is equally effective as a by-the-book major. Since there must be a romantic subplot, it is fortunate indeed that the heroes’ ladies are played by two charming and talented actresses, Helen Cherry and Stella Andrews.
END_OF_DOCUMENT_TOKEN_TO_BE_REPLACED