A singer arriving in Hollywood is tricked by jewel thieves to distract a wealthy audience. END_OF_DOCUMENT_TOKEN_TO_BE_REPLACED 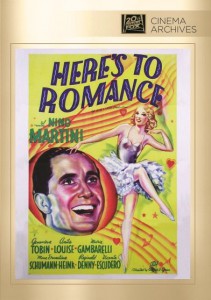 International singing sensation Nino Martini made his American film debut in the Jesse L. Lasky production Here’s to Romance. His career bankrolled by the beneficent opera diva Mme. Schumann-Heink (playing herself), singer Nino Donelli (Martini) hits the big time, and as a bonus falls in love with his leading lady Lydia Lubov (Anita Louise). For a while, however, their romance is nearly loused up by wealthy, self-centered art patrons Kathleen and Emery Gerard (Genevieve Tobin and Reginald Denny). Also complicating matters is amorous ballerina Rosa (Maria Gambarelli), but she leaves the scene after turning down both Nino and Emery. Often listed as a 20th Century-Fox release, Here’s to Romance was actually one of the last Fox releases before the merger with 20th Century.
END_OF_DOCUMENT_TOKEN_TO_BE_REPLACED