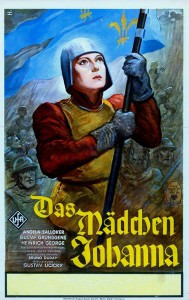 The story of Joan of Arc has been filmed so often that it need not be repeated here. This 1935 version obviously can’t quite compete with the masterworks Dreyer, Bresson, or Rivette derived from the same story, but it’s nevertheless a very effective film which focuses much more on the intrigues of the men around Joan than on the girl herself, who gets surprisingly little screentime. END_OF_DOCUMENT_TOKEN_TO_BE_REPLACED