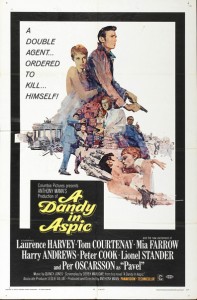 Double-agent Alexander Eberlin is assigned by the British to hunt out a Russian spy, known to them as Krasnevin. Only Eberlin knows that Krasnevin is none other than himself! Accompanying him on his mission is a ruthless partner, who gradually discovers his secret as Eberlin tries to maneuver himself out of a desperate situation.
END_OF_DOCUMENT_TOKEN_TO_BE_REPLACED 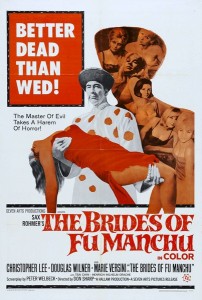 Christopher Lee returns as Sax Rohmer’s insidious Asian villain Fu Manchu for the second of his five vehicles. This time Fu Manchu and his army of henchmen are kidnaping the daughters of prominent scientists and taking them to his remote island headquarters. Instead of asking for ransom, Fu demands that the fathers help him to build a death ray, which he intends to use to take over the world. But Fu’s archenemy, Nayland Smith of Scotland Yard, is determined not to let that happen…
END_OF_DOCUMENT_TOKEN_TO_BE_REPLACED 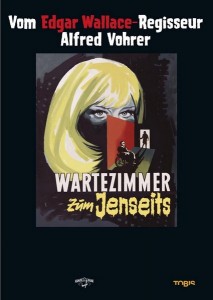 The nephew of a murdered millionaire decides to track down his uncle’s killer. He faces many life-threatening dangers as he tries to break into the inner circle of the sinister criminal “The Tortoise.”
END_OF_DOCUMENT_TOKEN_TO_BE_REPLACED 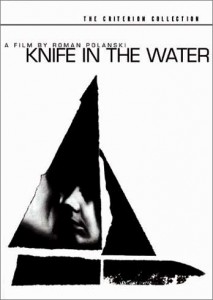 Well off Andrzej and Krystyna’s marriage is at a stage where familiarity breeds contempt, that contempt which is outwardly shown only behind closed doors and only when an incident of some sort sets off one or the other. While driving through the countryside on a Sunday on their way to the lake to embark on an overnight sailing excursion, they almost run over a young male hitchhiker. Despite the antagonism between Andrzej and the hitchhiker, Andrzej offers him a ride as far as the marina. By the time they reach the lake, their antagonism has dissipated enough that Andrzej asks if he would like to join them on their sailing trip. The hitchhiker accepts despite knowing nothing about sailing. As the sailing trip progresses, the antagonism between the two men begins to increase again, fueled on both sides as each strives to be the alpha male. Andrzej needs to show his superiority, while the hitchhiker needs to show that his young age and inexperience, not only with sailing but with life in…
END_OF_DOCUMENT_TOKEN_TO_BE_REPLACED 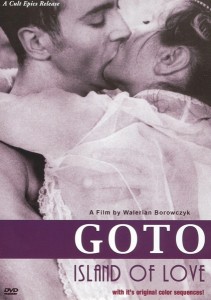 Walerian Borowczyk’s second feature was just as original as his first. Almost entirely live action this time, it is situated on the archipelago of Goto, which has been cut off from the rest of human civilisation by a massive earthquake and has consequently developed its own arcane rules. Melancholic dictator Goto III (Pierre Brasseur) is married to the beautiful Glossia (Ligia Branice), who in turn is lusted after by the petty thief Gozo (Guy Saint-Jean) as he works his way up the hierarchy.
END_OF_DOCUMENT_TOKEN_TO_BE_REPLACED 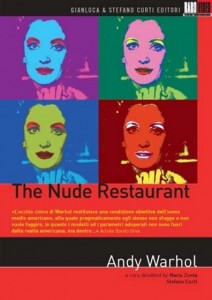 At a New York City restaurant, the patrons are men, nude but for a G-string, waited on by one woman, also clad in a G-string (played by Viva) and a G-bestringed (bestrung?) waiter. Some of the “nude” patrons leave the establishment, their places taken by new customers, also nearly in the buff. There are numerous in-camera jump cuts (known as ‘strobe cuts’) and the camera weaves around a bit. The waiter and waitress move from table to table, talking to the customers. Taylor Mead sits smirking at the fountain, where eventually he partakes in a long conversation with Viva about her Catholic childhood. Viva, the waitress if not the actual person, seemingly is obsessed with the subject of lascivious priests. There is more strobe cutting and at one point, Viva turns to the camera and asks that it be turned off. The camera is turned off and, after an interlude, is turned back on again, after which Viva continues with her monologue.
END_OF_DOCUMENT_TOKEN_TO_BE_REPLACED 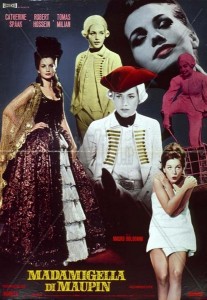 Mlle de Maupin escapes from her uncle’s castle, invaded by Hungarian troops, under the guise of a clergyman named Theodore. An army recruiter forces Theodore to enlist in the King’s army, and not even the religious robe is an insurance against it. Theodore is assigned to be aide-de-camp to Alcibiade, a man as virile in combat, as he seems troubled for the figure of his aid… D’Albert, an aristocrat, will expose Theodore’s true sex, and after a number of confusing, comedy situations, Alcibiade will appease his troubled feelings.
END_OF_DOCUMENT_TOKEN_TO_BE_REPLACED 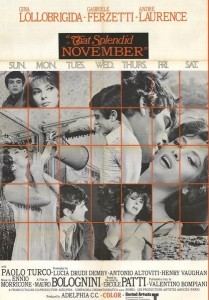 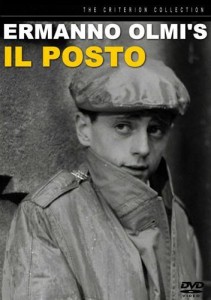 Domenico and Antonietta are two suburban Italian youths who meet while seeking “a job for life” from a big city corporation. After a bizarre screening process made up of written exams, physical agility exercises, and interview questions such as “Do you drink to forget your troubles?” (Domenico and Antonietta are no older than 17 or 18), they land jobs in the “Technical Division” and “Typing Services” respectively. From there, Domenico works as an underutilized errand boy until a clerk position is vacated by the death of an older employee. Domenico finally takes his place in a room of 12 other clerks with a manager overseeing them from a desk at the head of the room. The film ends as Domenico ponders his fate, from behind his tiny desk at the back of the small windowless room, listening to the sound of the mimeograph machine as it runs off carbon copies next to the manager’s desk.
END_OF_DOCUMENT_TOKEN_TO_BE_REPLACED 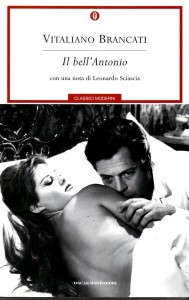 Women love handsome Antonio because they think of him as the perfect lover. But he has problems to fullfill this ideal and Barbara only notices his failures when they are married. When the town learns about his trouble they start laughing at him…
END_OF_DOCUMENT_TOKEN_TO_BE_REPLACED 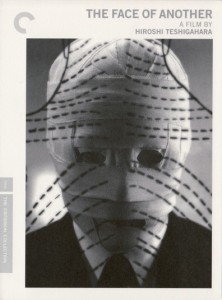 A businessman facially scarred in a laboratory fire receives psychotherapy from a psychiatrist, and obtains an amazingly lifelike mask from the doctor. Soon after being fitted for the mask, he seduces his wife and succeeds. But his wife claims she was aware all along who he was and believed that both were just masquerading together as most couples usually do in different ways. Strangely enough, his personality seemingly begins to change after he puts on the mask as if the mask has influenced his personality. His new identity does not enable him to reintegrate into society after all. A subplot is inserted in fragments. A good-natured young woman, the right side of whose face is disfigured, has been hurt by others’ inquisitive eyes and insults, and has been shunned by men. She asks her older brother, the only man who understands her pain and solitude, to make love to her, hiding from him the intent of killing herself after then.
END_OF_DOCUMENT_TOKEN_TO_BE_REPLACED 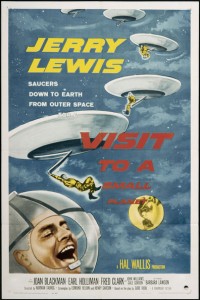 Jerry Lewis is Kreton, a childish alien who, against his teacher’s will leaves his planet to visit the Earth, and lands in the backyard of a famous television journalist who doesn’t believe in U.F.O’s and aliens. Wanting to study humans but not able to fully understand them, Kreton makes a mess out of it, generating a lot of comic situations.
END_OF_DOCUMENT_TOKEN_TO_BE_REPLACED 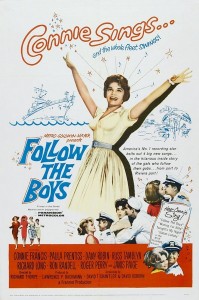 Bonnie, Toni, Michele and Liz are on the Riviera to visit their respective husbands and boyfriends in the U.S. Navy. Bonnie tries to resume her canceled honeymoon, Liz wishes her newly-promoted husband would settle down, Frenchwoman Michele wants Lt. Langley to spend some time with her, meanwhile his fiancée Toni takes an interest in Lt. Smith.
END_OF_DOCUMENT_TOKEN_TO_BE_REPLACED 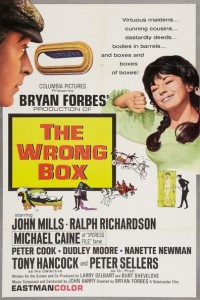 A tontine is established for a dozen children, a tontine being a kind of bet/insurance, money is put in for each to grow with interest and the last survivor is to get the lot. We watch the group dwindle until only two brothers are left. One brother is watched by his nephews who will keep him alive at all costs, the other lives in ill health and poverty as the only support of his fairly stupid grandson. Statues and bodies are switched, in the wrong boxes until everyone is sure someone has died. Now if they can only make it seem as if the other brother died first, hundreds of thousands of pounds (in Victorian England when a pound was a pound) will be theirs.
END_OF_DOCUMENT_TOKEN_TO_BE_REPLACED 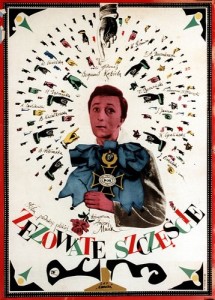 The story is an odyssey of a little man through Poland of 1930 to 1950. It shows his attempts to cope with a changing world which seems to have no place for him. He has no consciousness of any kind but is always on the verge of turning into a more coherent human being, only to be slapped down. It begins with the hero’s childhood. Then comes the first love marred by his unwilling involvement in fascict politics, him being taken for a Jew because of his nose. Later he decides to join the army to charm the girl, but arrives too late for any fighting. He is arrested by entering German troops while he dresses in officer’s uniform and mistakenly sent to POW camp as an officer.
END_OF_DOCUMENT_TOKEN_TO_BE_REPLACED